The sun smiled down as the Independencia based members of CAH loaded into the pickup truck for the +hour drive to Huancarani. The weavers had begun to gather at the site of Doña Toribia´s old house, and had a fire going in the wood burning oven. Because there was a roof over the oven, it was the only structure still standing. The other adobe structures had dissolved back into the earth.

A tarp was rigged over an aged peach tree to provide shade. An advantage to the site was that it had a water spigot, so plates and wash tubs were brought down from storage in the abandoned women´s clubhouse and scrubbed. Upon arrival, each weaver would dump fresh dug potatoes into the growing pile being washed. PAZA contributed the beef and soft drinks as part of the Spinzilla prize awarding feast. The annual meeting began as soon as the oven was loaded and sealed with mud around the door. 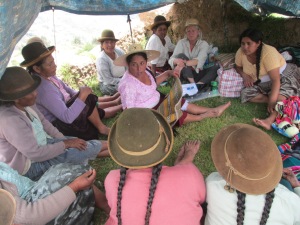 Approving 2016 Prices for the Weavings

The meeting didn´t go as planned. Municipal government officials, a radio reporter, and the President of the Sindicato Central who heads up the Organizations of Women in each community crashed the meeting. They´d heard the announcement for the CAH meeting, and knowing the women would be gathered decided it would be a good day to hold their meeting.

The last item on the CAH agenda was to talk about Independencia´s “Artesanía Fair”. It had been held a few weeks prior and Huancarani´s traditional textiles were not included in the judging. The discussion on how to work with the local government could not take place in front of the very authorities who had been responsible for the “Artesanía Fair”. Instead the CAH meeting abruptly ended, the oven was unsealed, and the visiting authorities were served first.

Spinzilla was discussed prior to the interruption. The weavers love Spinning Week and Doña Alicia said, “When I die, then I will stop competing”. Three elderly women joined the CAH because they wish to participate. It is a competition in which the grandmothers excel. The women also voted to invite a foreigner to join the Team Warmis Phuskadoras in 2016. They want to see a foreigner spin, and it can be with a drop spindle or spinning wheel. They discussed and voted to have a gathering for a mini-competition among themselves which will be scheduled prior to Spinzilla Spinning Week. The final Spinzilla item discussed was to vote on a prize for 2016, and they chose petticoats, fancy ones… The petticoats will be sewn in the PAZA workshop, so Club de Artesanas members will be able to put all their training into practice and earn some income.

The awarding of the Spinzilla prizes followed lunch and was rushed because of the authorities’ request to hold a meeting to reorganize the Organization of Women, and to gift 3 knitting machines. Only Doña Alicia opened her Spinzilla prize package which included a sky blue sweater, a Spinzilla certificate, and a photo taken during the Spinzilla Spinning Week. A huge thank you goes out to Liz Gipson, Spinzilla Marketing & Communications, for printing and mailing the certificates.

A huge gust of wind blew through sending the tarp flying and all scurrying down to the school for the next meeting. Due to migration and few primary school aged children a classroom was given to the women to be their workshop. It contained 3 treadle sewing machines, an industrial sewing machine, and the 3 new knitting machines all purchased over the years with the women’s artisan budget. Unfortunately, there’s been no training provided. 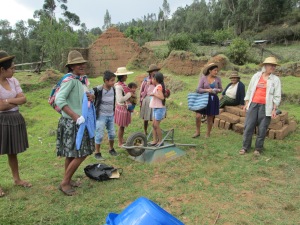 The President of the Centro Sindical facilitated the meeting to elect a new Board of Directors for Huancarani´s Organization of Women. There were no volunteers so she selected 5 names from the list of members, held the election, and the new Board took a bow. Doña Maxima is the new Secretary of Relations. The women commented later about their disappointment in being rushed through a day they´d looked forward to socializing and enjoying. However, Doña Máxima´s political clout may help smooth the way to collaboration and getting the local artisan program back on track by supporting the Huancarani weavers and traditional textiles.

Please contact Dorinda at dkdutcher@hotmail.com if you are interested in being the volunteer to join the 2016 Spinzilla Team Warmis Phuskadoras. The team also needs a social media volunteer who will also film and edit the short highlight video. Dorinda Dutcher, January 13, 2016