Spinning Week in the Andes

The unofficial Spinzillita Spinning Week in Independencia, Bolivia went off without a hitch. It is the 5th year the rural weavers have spent the first week in October spinning and eyeballing each other’s progress. For lack of a TNNA Spinzilla sponsor they could not officially compete. 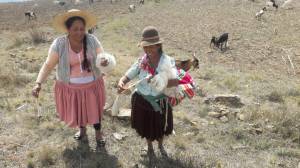 Mid-week Doña Maxima contracted a vehicle for the ride winding up the mountain west of Independencia, along the ridge top, and halfway down another mountain into Huancarani. Doña Justina had the 19 participants in that community organized for a photo shoot and evaluation of the yarn spun thus far. Being dry season, the rough track that serves as a road to farmsteads to the west was passable. A stop was made near the farmstead of Doña Narciza, Doña Maxima´s only sibling still residing in Huancarani, who was out and about with her goat herd. Backtracking to the central part of Huancarani, a large group of spinners were waiting at the soccer field. Spinning and chatting the group headed uphill together in search of Doña Toribia who was in a large meadow, and perfect picnic spot, spinning and watching over her flock of sheep.

Doña Toribia and Her Flock

On Monday, the day following the end of Spinning Week, Doña Maxima, Doña Antonia, and Vilma made the trip to Huancarani to measure the yarn spun. PAZA paid a wage to the latter 2 because help was needed for measuring. In the past, PAZA volunteers were on hand to help with the wearisome task of measuring out yard after yard of 2 ply yarn between 2 marks on a wooden table. Although the enthusiasm for Spinning Week has grown, the results were the lowest in 5 years.

In 2017, the Cloth Roads team Warmi Phuskadoras last official participation in Spinzilla resulted in 70,390 yards spun on drop spindles placing them in 27th place out of 70 teams. This year the yarn spun dropped to 54,524 yards, which would have placed them in the 24th place out of Spinzilla´s 38 official teams. Doña Maxima´s norm was well below past years because of travel days. She was probably exhausted as well because Spinning Week began the day after her daughter´s 3 day wedding and celebration in Cochabamba. She was 100% in charge during Wednesday´s all day trip to Huancarani which meant more work for her and less time to spin. This is the first blog posting where she is credited with the photos. 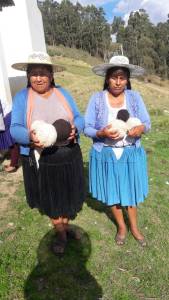 Doña Casimira had her 3rd win by spinning 3,852 yards. There were 3 first time competitors, all young! Maribel, who was spinning in her second competition, beat Doña Maxima. When it comes to hand spinning, it is the elder women who place highest. Their skill will be recognized and celebrated at their December 19th meeting and feast. The prize this year is a mesh shopping bag. 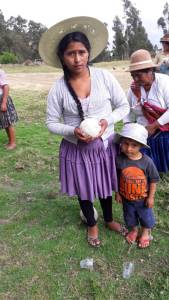 By strict adherence to the Spinzilla rules, the event has offered the women opportunity to learn to problem solve and to work together as a team. This year 4 unregistered spinners did spin during Spinning Week. During a Skype call with PAZA, Doña Maxima asked 3 different ways if it was possible to get around the registration deadline to be able to give the unregistered spinners a prize. One of the spinners is her mother-in-law, who she prefers not to upset. Registration closed the end of July, the rules can’t be changed, and the PAZA budget is fixed. The PAZA suggestion was to ask the registered spinners to take up a collection to purchase mesh bags for the 4 extra participants, especially since they paid no participation fee as in years past. 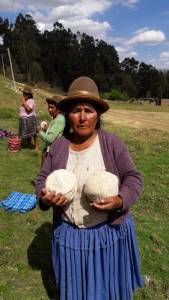 The spinners say they are accustomed to Spinning Week and would be disappointed if it is cancelled. PAZA has not found a 2019 TNNA sponsor, and with the decline in participation in Spinzilla this year, its future seems uncertain. However, PAZA hopes to find a way to help the spinners carry on the Spinning Week tradition and celebration of their spinning skill. The key word is “tradition” these women are the last generations to live the ancient farmer subsistence lifestyle that intertwines spinning and weaving with self-identity.

Thank you Sue Brady, Patty Tompkins, Jenny Heard, and Rob Nash, the team’s Spinzillita supporters and friends for your generosity. PAZA is still raising funds to cover expenses for December’s annual meeting of the Centro de Artesanía, Huancarani and Spinzillita Celebration and the ongoing expenses of the Club de Artesanas in Independencia. Dorinda Dutcher, October 29, 2018