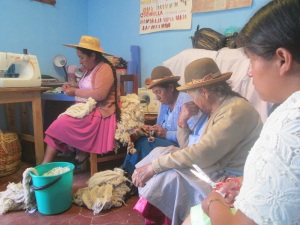 Is there anything more wonderful than a joyous homecoming? The bus ride from Cochabamba to Independencia at the end of the rainy season is spectacular with the vivid green of wheat fields and pale green of the high mountain grasses that will soon fade to drab tans. Bright yellow flowering shrubs reaching 8’ tall line the road descending into the Palca River Valley where a growing Independencia is nestled.

Spigot by the Church, Huancarani

PAZA has been in transition since April 2018 when Doña Maxima took over management of the Independencia activities and Dorinda relocated back in the U.S. The time had come to evaluate if PAZA will continue and if so how. There was a happy reunion between Dorinda and the Huancarani weavers who had come to town for market day. Many brought handspun skeins of wool for the upcoming Club de Artesanas dyeing extravaganza.  A year ago, the PAZA workshop/store was relocated a few doors down from its former location and Dorinda´s home for 12 years. The walls of the new smaller space were lined with equipment and supplies. The little bit of free space in the middle of the room was packed with women sitting on low stools and spilling out the door.

A meeting of the weavers of the Centro de Artesania, Huancarani had been arranged for the following day. Doña Maxima, Dorinda, & Vilma loaded into the family van driven by Doña Maxima´s husband. The meeting was held on the church´s covered porch, and as always there was a wait. Most of the weavers had been in Independencia the day before, and had to pasture livestock before heading to the gathering. The rain gods took a break and although overcast the rain held off. The weavers arrived in ones and twos from all directions, many with their drop spindles whirling. Doña Narciza, Max’s sister, was absent. She’d been in Independencia the day before and mentioned that her goats were dropping kids. Over the next week her flock increased by 54.

The purpose of the meeting was 2-fold. The first was for the weavers and Dorinda to confirm their commitment to continue working together. The repeated statement of, “I’ll weave until I die with your support” was a strong affirmation for PAZA to carry-on.

The second topic was what to do about the lack of a Spinzilla sponsor and the lack of clarity as to Spinzilla’s future. Dorinda put forth the idea of a 16 member Warmis Phuskadoras team made up of the first 16 Huancarani spinners to sign up. A second team would be comprised of the Independencia spinners, the spinners from Sanipaya who were excluded last year, and Huancarani spinners who sign up late. The 2 teams would compete against each other. The excitement and an animated discussion of the idea went on for over half an hour. 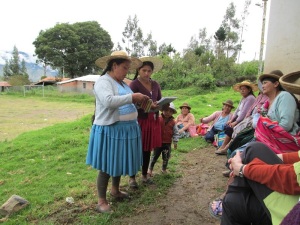 The 4 years of official Spinzilla participation as the Cloth Roads Warmis Phuskadoras and last year’s local spinning event have turned Spinning Week into a much anticipated tradition. Spinzilla Spinning Week has always been the first week in October which is a downtime in the Andean agricultural calendar. The spinners titled Spinning Week 2019 as “La Semana de las Phuskadoras” a mishmash of Spanish and Quechua that means “The Week of Women who Spin with Drop Spindles”.

On the return to Independencia, the van stopped a few times and the occupants spilled out to harvest dye plants along the side of the road. Not having a home any longer in Independencia, Dorinda was staying at the local modern hotel run by the Centro Cultural Ayopaya. After 4 nights and a conversation with her former landlord she rented two of her former rooms and moved back home. With biannual visits planned, it made economic sense to rent by the month while offering tangible proof of her commitment to the weavers. The larger of the rooms is the former PAZA workshop/store and will allow Doña Maxima to store unneeded equipment and supplies to free up space in the current workshop/store.

The fundraising efforts for PAZA have been minimal the past year due to the uncertainty of PAZA’s future. The weavers are doing their part in Independencia and Dorinda´s doing her part in Bozeman. We appeal to PAZA supporters to do their part to support this grass roots textile preservation effort by clicking on the “Donate” button above. The budget for Spinning Week is $1,200, and the monthly budget for the Club de Artesanas in Independencia is $175 per month. Another way to support the weavers is by purchasing weavings. The current inventory in the U.S. is tying up ¾ of the revolving fund limiting PAZA´s ability to keep the orders and cash flowing to the weavers. There is woven cloth for your own projects in the form of 63” x 9.5” weavings, fajas, and straps. There are also zippered pouches with and without wrist straps and yoga mat straps in 2 sizes. Thank you! Dorinda Dutcher, May 28, 2019