It took the Club de Artesanas (CdA) members two dye days to attend to the pile of hand spun skeins of wool yarn that had been dropped off by the Huancarani weavers. All had requested cochineal tones, which was a good thing because this dry season is unusually dry and there are few local dye plant options. The municipality is rationing water and the hours it is available grow shorter weekly. Multiple containers were filled in the early mornings to handle the rinsing of the dyed skeins. Because both stovetop burners were not in use it was decided to premordant some of the skeins. On the first dye day alum was the premordant and on the 2nd dye day copper sulfate was used to dye the first batch of skeins a dark burgundy. There is something very satisfying about watching a clothesline full of newly dyed skeins drip drying.

Amy Booth played hooky from her volunteer work in Cochabamba with Performing Life Bolivia to volunteer in Independencia for a week. She enjoys lace knitting, so Lynne Watterson’s book, “The Very Easy Guide to Lace Knitting” which Dorinda’s Aunt Laura had mailed to the CdA years ago finally came off the shelf. It is now looking much used and loved. Amy worked with the women to knit a variety of samples from the book, and then they all trooped off to a local yarn store so the women could buy yarn to make sleeveless tops using their preferred stitches from the samples. Amy squeezed in 3 weaving classes with Doña Maxima and worked diligently into the wee hours completing her homework.

Although Amy had packed light for her week-long stay, she´d brought along 3 juggling clubs. John Connell, the founder of Performing Life, and volunteers teach circus skills to street kids. The kids use the skills to earn money by juggling at intersections around Cochabamba. The program is expanding to include aerial silks and trapeze and classes will be available for a fee to help subsidize the organization´s other programs. Amy is the second PAZA volunteer who spent years of her youth in a circus training program in London. She found out about Performing Life and PAZA through Sustainable Bolivia, a U.S. foundation in Cochabamba that has supported PAZA´s volunteer program and sales of the weavings since 2010.

August 6th, is Independence Day in Bolivia and the festivities kick off with a lantern parade the night before. A number of the CdA kids took advantage of the Club’s supplies to make their candle lit lanterns. Luckily, it was a lantern parade because the town’s electricity went off just as the parade started and didn´t resume until a few hours after it ended. The flaming “2016” sign of the graduating class was spectacular, as were the stars on the dark walk home. Everybody was dressed in their best for the official parade on August 6th. Volunteer Joey Hentzler arrived on the bus from Cochabamba during the parade and had no trouble finding Amy and Dorinda in the crowd.

Joey and the CdA Kids

Joey worked with the CdA kids teaching them about Día de los Muertos traditions in Mexico. They also used up leftover tissue paper from lantern making to make paper cutouts that were taped to string like prayer flags and taken home to decorate empty walls.

Everyone Smiled When the Juggling Clubs Came Out

Alas, CdA trainer and weaver, Doña Maxima, was not sitting on pins and needles waiting to update Dorinda on 3-1/2 months of local gossip. In fact, local news is rarely related unless a topic is brought up that triggers a story. It was a bit of a shock while trolling for recent news to hear 2 year old scoop! While discussing the lack of retention of new CdA members, Doña Máxima said a member lasted only 1 year because her husband told her traditional weaving is something that only poor women do! It shouldn´t be a surprise considering that as rapidly changing rural Bolivia “progresses” the locals who now think of themselves as “modern” would spurn anything that might connect them with being old-fashioned. Doña Máxima didn´t appear disturbed about the attitude, her expression conveyed, “what idiots.” She did say that the CdA would probably be more successful in teaching weaving to young teens who live with female relative(s) who are weavers and can help at home.

Thank you Dorothy Thursby and Susie Strauss for your ongoing support of the PAZA activities. Thank you George Dutcher for your contribution to the soap making project. The smelly chore of rendering a mix of beef and sheep fat was done last week so the CdA members will be making lovely scented milled soap in the weeks ahead.

Thank you Jere Thompson for your help in getting the word out in our search for 2 volunteers for Spinzilla Spinning Week! We do need to raise funds for this year´s expenses which are estimated at $1,000. That account is currently in the red. Please consider supporting the Team Warmis Phuskadoras by clicking on the Donate button above. Thank you! Dorinda Dutcher, August 19, 2016 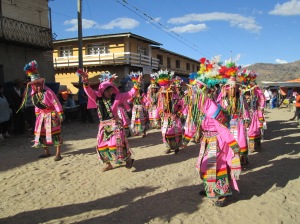 The first 3 weeks of July were the winter school vacation in Bolivia. Only 2 weeks had been scheduled but the cold temperatures made opening the unheated classrooms impractical. It was just as well because the 3rd week was the Fiesta del Virgen del Carmen, a 5 day party in the streets of Independencia. There were 6 folkloric dance fraternities this year, including both schools and school bands. Music, usually from multiple bands all playing something different went on almost 24 hours a day. As wife of the mayor of Huancarani, Doña Máxima had 2 full days and nights of cooking and hosting responsibilities. Her 2 sisters and her daughter came from the city to help with the work.

Volunteer, José Sánchez, a middle school teacher from Mexico, arrived mid-July wishing to introduce Madonnari, drawing on sidewalks with pastel chalk, to Independencia. He participates in competitions in Mexico, and was very patient in responding to the most common question as to why he and the 3 chicas he taught at the Bolivian Alemán High School weren´t painting on a wall. The chicas chose an image of the Virgin de Carmen which they and José worked on for a week in the entrance to the high school. The following week they worked at the other high school with José to teach 2 interested chicas, who had selected a small image of the face of Don Bosco for whom their school is named.During his short stay José has become well known and receives enthusiastic greetings as he walks through town.

He graciously accepted a request from a high school teacher toassist the senior class in drawing and painting a large map of Bolivia. They will march it through the streets during the Independence Day parades on August 5th and 6th.The local teachers are frazzled as they attend to their duties of hosting the “Olympics”, which brought in thousands of students from 8 municipalities for 6 days of events during the last week of July. They know they also need to have their studentsprepared for the Independence Day celebration the following week. Nothing can be done while the classrooms serve as dormitories and the public spaces are lined with an army of local women cooking huge pots of food. 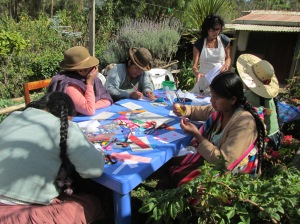 Judy Richardson, the artist-in-residence for Sustainable Bolivia, arrivedlugging a backpack full of art supplieslate July for a 6 day visit. She found the Club de Artesanas (CdA) women initially resistant to drawing, but within an hour all were totally immersed in their work. There was much laughter during the puppet making class. Vilma´s 8 year old son who´s often in trouble at school flourished under Judy´s encouragement in drawing, puppet making, and mask making classes.

Both José and Judy worked with the kids of the CdA women and the CdA chicas. It was amazing to witness how engaged the kids can be with age appropriate learning activities. The volunteer program has lost momentum over the past year, and after these past few weeks it´s obvious that the technical assistance volunteers bring to this remote area is priceless. You will be noticing an increased effort to revive the program.

Thank yous are overdue to those of you who have made the PAZA activities of the past few months possible. A hug and thanks from all of us goes out to friend and mentor Irene Schmoller, Dori Painter, and Dorothy Thursby-Stern. Thank you Cindy Howard Gibbon for the Ashford NiddyNoddys that will ease our measuring woes following the Spinzilla Spinning Week.Thank you for the support and the great visit Laurie, my dear friend.Aunt Laura, it was wonderful to see you, thank you for your support and

Joyce Dutcher with Her English Class, 1981

encouragement. Last but not least, thank you Joyce Dutcher for another contribution to the revolving fund that allows the weavers to receive immediate payment for their weavings. Love you mom…

I am proud to make one final announcement. Joyce Dutcher has finally published, “American Teacher in China, 1980-1981” a book she wrote in 1982 after spending the best year of her career teaching English at the Northeast Institute of Technology in China. The semi-autobiographical tale is a great read that captures a fascinating nano-second in the history of China between the Cultural Revolution and the modern world it is today. The realization of how quickly technology has changed Chinese society is startling. Dorinda Dutcher, July 31, 2015