How much fleece can an Andean woman spin in a week? They learned as children and have spun almost every day of their lives. How to measure the fleece spun in a week? What’s a yard? Meters are used here.

Doña Máxima, team captain, arrived at the PAZA workshop/store early for Saturday´s measuring extravaganza. She bagged up all the weavings in the store to keep them safe from the moths that would invade once the lights were turned on. The room began to fill at 4:30 with spinners and their families. Experience has taught us that we just need to jump into new activities, figure it out as we go along, and then talk about improvements to do better in the future. Pre-planning is not successful until there is an understanding through practical experiences.

Broomsticks and tables became yardsticks and we began measuring with two teams of 3. After participating on a team the experienced branched out to form new teams. Each ball of yarn was weighed in grams and ounces then dropped in a bucket. One person measured by yards calling out “marca” or “cinco” every 5 yards to the recorder who made a tally mark. The spinner rewound her ball of yarn keeping a sharp eye on the measuring and on the recorder.

The 3rd Team Took Advantage of the Outdoor Space and Sunlight

The third team formed outside while the sunlight lasted before moving into the “library” and marking the wood table to serve as a yardstick. The 4th team filled the remaining available space in the workshop, and the 5th team set up at the kitchen table.

The measuring was tedious and back straining, but the ambience was energizing.  I handed Doña Alicia a tally sheet and a pen, which she initially shied away from. Born during the final years of the hacienda system when girls were not considered worth educating she never went to school. As an adult she learned to sign her name to forego the humiliating experience of signing with a thumb print. Being a good sport, she took up pen and paper and proceeded to do an excellent job as recorder, which was an empowering experience for her. 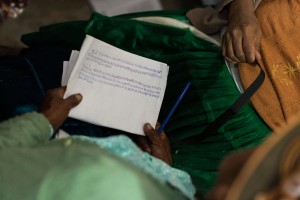 It´s embarrassing to confess I failed at supplying a suitable tally system and sheets. We began with a small box on a spreadsheet, the tally ticks made were so small that it took 3 people counting and recounting to get an accurate total. Blank sheets of paper were supplied in various sizes, but team Captain, Doña Máxima, came up with the best method for counting up the tallies by using the squares on graph paper to make the ticks. I know you´re wondering why we didn´t use the 4 ticks with a diagonal slash to be able to quickly count in groupings of 5. My lame excuse is that the evening was too far along to change tally systems by the time I noted that the seemingly endless rows of tally marks were going to make for a counting nightmare.

Doña Julia Waiting for Her Yarn to Be Measured

Around 10:30pm as the measuring was coming to an end and the women and their husbands began talking about reorganizing Huancarani´s Organization of Women. My landlords were hosting their son´s German father-in-law who has supported a local non-profit organization for decades. The women had worked with he and the organization almost 20 years ago to obtain the gas powered grain mill in their Clubhouse. The Organization of Women has been in conflict for years and finally ceased to function over a year ago. In half an hour they´d elected a new Board, had me write and print a request for solar panels and an outdoor sink for their homes, and had selected weavings as gifts to accompany their request.

The evening of togetherness was an incredible experience for all of us. The patience of the women is inspirational. They waited their turn, pitched in, and made the most of an opportunity to socialize together. A huge thanks to the Spinzilla organizers, Team Warmis Phuskadoras sponsors ClothRoads and Thrums, LLC., and to Jonathan McCarthy for volunteering his time and skills. Jonathan is putting the finishing touches on a short video of Spinzilla´s Team Warmis Phuskadoras in Bolivia that will soon be available online.  Dorinda Dutcher, October 13, 2014