Llamas in a Variety of Colors

Susan Weltman, a weaver, who had listened to Dorinda´s tales at Weave a Real Peace (WARP) Conferences for the past 5 years, decided to check out Independencia for herself. Her husband, Steve Jervis, thought Bolivia sounded like a grand adventure and in late February they were Independencia bound. Although their stay was short, the Club de Artesanas (CdA) squeezed in 2 dye days. Susan and Steve treated Doña Máxima, Doña Antonia, and Dorinda to a “shopping” day in the campo. The other CdA members had kindergartners to pick-up mid-day so had to decline the excursion invitation. 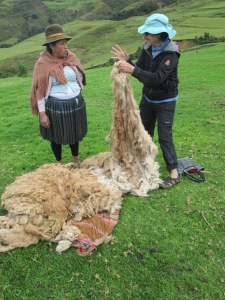 The persistent chill rain stopped the afternoon before the excursion giving the road time to dry out. The air was fragrantly herbal and sun bright on the morning all climbed aboard the chartered pickup truck. The +1 hour drive headed up the mountains to the farmstead of Don Franciso and Doña Gregoria, owners of a variety of fiber on the hoof – alpacas, llamas, and sheep. The last fiber shopping trip to their farm had been in 2014. PAZA bought 3 kilos of tan alpaca fiber for $17.24. Doña Gregoria was firm on her price which hadn´t gone up since 2014, and she had no interest in raising it. 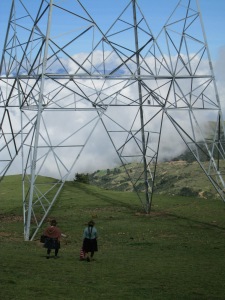 Towers that have Eclipsed the Vistas

One huge change since the last visit was the intrusive electricity towers that marched through the family´s farmstead. The towers first appeared on the horizon to the southeast of Independencia in October 2014. By April 2015 the cable was being strung along their path through the Palca River Valley where Independencia is situated. The sheer speed and efficiency with which the towers were erected was an amazing feat to witness. Alas, there is no tower-free vista and the electricity generated by a new hydroelectric dam is traveling the cables to be sold outside of Bolivia, bypassing communities and farmsteads such as that of Doña Gregoria´s that lack electricity….

After the selection, weighing, and purchase of the alpaca fiber the group

ambled leisurely up the mountain following the grazing llamas and alpacas. A short break was spent watching the babies frolic. Doña Máxima identified her former llamas that she had sold to a llama broker for a pittance to help cover the costs of hosting Carnaval in Huancarani last month. Culturally she has more faith in ownership of livestock than money in the bank, so it saddened her to know the llamas were no longer hers.

Digging up Potatoes Without a Shovel

The group continued uphill to the top of the world where the truck awaited. The next stop just past the crossroad to Huancarani was the potato patch belonging to Doña Antonia´s father. The ground was moist enough so that Doña Antonia and Doña Máxima could gently pull on the plants bringing the small white potatoes out of the rich black soil. Susan, Steve, and Dorinda walked along the side of the road picking the sunny yellow flowers, misiq´o (Bidens andicola) for the next day´s dye pot.

Steve and Susan Headed for the Picnic Spot

All loaded back into the truck to move a little lower in altitude to where the misiq´o flowers and suyku (Tagetes graveotens Schultz) could both be harvested along the side of the road. The truck headed down to a picnic spot, while the group walked downhill enjoying the views and harvesting dye plants. Susan’s comments of awe reminded the locals of their good fortune as to the abundance and variety of dye plants.

A huge thanks to Susan and Steve for an unforgettable week and for the weaving order, as well as for carrying the other orders back to the U.S.! Thank you Lyn Lucas, David Anderson, and Dorothy Thursby-Stern for your continued support. You´ll be happy to know that Doña Máxima has her llamas back. PAZA purchased them for $130 as a way to balance the wages she will not earn when the CdA meetings are reduced to 1 day a week during Dorinda´s upcoming U.S. trip. Dorinda Dutcher, March 12, 2016