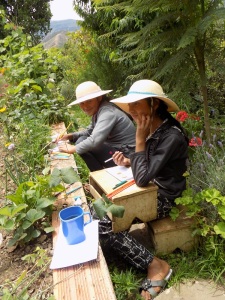 Summer vacation is rolling towards its conclusion and the Club de Artesanas (CdA) chicas will return to classes on February 6th. They will continue Club activities on Saturday morning and for lack of an older teen familiar with CdA the older chicas who are sophomores this year will trade off as the CdA Saturday trainer. This is their 3rd year as Club members and the wage that goes with the additional responsibility will help them with their school expenses. The trainers the last 2 years were high school seniors who had been CdA members in their early teens. By training the sophomores this year with the younger girls looking on the Club will have Saturday trainers for the teen activities for years to come. 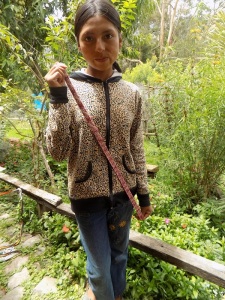 The chicas know they can drop by on Tuesday and Thursday afternoons to work on their weavings with Doña Máxima. Unfortunately, during the vacation they did not graduate to the leaning frame loom nor acquire the expertise to begin weaving to sell. However, thanks to Laverne Waddington´s visit they have interest so there is hope.

On January 26th, the Club de Artesanas (CdA) held the annual Fiesta de Don Jorge with mask and crown making, a grand march around the yard, games, dance competition, piñata bashing, lunch, and finally chocolate cake and a rousing round of  “Feliz Cumpleaños, Don Jorge”. Seven year old Emily sang her heart out and was bothered that Don Jorge was not able to be at the party for all the fun, especially since he´d bought the puzzles and decks of cards that were handed out as game prizes. Don Jorge is Dorinda´s father who will receive the sign, photos, and best

Short Work of a Piñata That Was a Lot of Work

wishes for his February birthday. Doña Máxima, Doña Antonia, and Adviana spent hours peeling and cutting enough potatoes for 20 into thick French fries. There is something about wood smoke infused French fries that can´t be explained but should be experienced. While Doña Máxima manned the fry pot over an outdoor fire, Zoraida cooked beef and chorizo in a savory broth in the kitchen. Everyone was given a plate of French fries topped with the meat to adorn as they wished with onion, tomato, chilies, hard-boiled eggs, and condiments. This Bolivian dish is called Pique Macho and is a fiesta standard.

Laverne Waddington sent 2 orders shortly after returning to her home in Santa Cruz from Independencia. The women spent time during Club days warping their weavings to fill the orders because the process of rolling balls of yarn along the ground the length of the weaving takes two. Six Huancarani weavers showed up two Sundays after Laverne´s visit and breathed a collective sigh of relief to find weaving orders waiting for them. The beginning of the school year creates a state of panic among the rural women who must miraculously come up with the cash to pay for the ever increasing lists of school supplies and uniforms with no source of a cash income. Two of the Huancarani weavers left skeins to be dyed with cochineal, so February kicked off with a dye day. 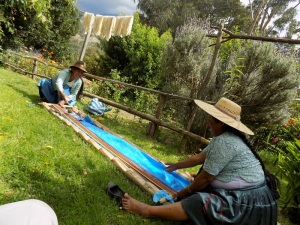 Warping Adviana´s Weaving That is Destined for Florida

The Club members will be dyeing regularly for the next few months of the rainy season so Doña Máxima looked through the dye supplies and came up with a list of needs. There is no online purchasing so sources have been physically tracked down through the years. The 2 gallon chicha vinegar container will be refilled early next month following Carnaval. The bag of salt chunks needs replenishing, so more will be purchased at a meat counter in Cochabamba´s huge vendor market. The unprocessed salt is used for meat preservation since many parts of the country don´t have electricity or refrigeration. A kilo of millu rocks, a mordant used to darken dye baths, needs to be purchased in the charm (ritual supply) section of the vendor market. The challah offering to the Pacha Mama (Earth Mother) that will be burned on the Tuesday of Carnaval will be purchased at the same time. There is plenty alum, cream of tartar, copper sulfate, and citric acid. Those purchases are made at a posh chemical store in Cochabamba. 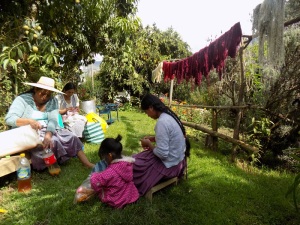 It is getting harder and harder to find khesi misa, the soot from kitchen cook fires, that dyes the wool skeins a rich brown that is popular with foreign buyers. It only accumulates in kitchens that have a thatched roof, and most homes have switched to tin roofs which don´t need replacing every year. Cochineal needs to be ground in the grain grinder, and we will need to look for a new source before year´s end because our previous purveyor has retired.

February will pass quickly as the CdA transitions into a new year-long session with a few new members. The weavers will be busy with orders. Life will just start to settle into a routine before being disrupted by the frenzied week of Carnaval which begins on February 26th. Because of the fiestas and fairs that happen regularly until December life really never will settle into a routine, which isn’t a bad thing…

Thank you Lyn Lucas and Dorothy Thursby for kicking off the year by supporting PAZA!  Dorinda Dutcher, February 3, 2017